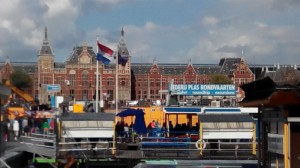 My study could have had no better initiation. After four and a half hours of traveling by train to Amsterdam I first stored my heavy luggage in a locker at Amsterdam Centraal, the main train station in the city. A quarter of an hour later and having paid 7,95 Euro for a 24 hours storing place I went out of the historically impressive building. Just a view footprints away there is the GVB building on the left hand side of one of the main entrances. GVB is the public transport company of Amsterdam. While entering the white building I realized the crowd inside. “Sure, it is high season”, I was thinking. The voices are like a composition of subjects representing all “travelling countries” in the world. I tried to find out how to cue in the right way. Some screens on the wall show changing numbers. “Ok, there must be a ticketing machine”. I found one which was not easy to use because you need to touch fields in order that the person on the desk knows exactly what you want before you go to the desk. At the desk I met a really helpful person called “K”. Finding out which ticket is the best for my purpose didn’t take much time. But K. gave me a perfect introduction into my ethnographic case study. When I explained why I stay in Amsterdam longer than a usual tourist, K. started to be interested.

K.: “Have you done research in Amsterdam before?”

Me: “I lived here about twenty years before. For a short period of time. I renovated an old ship at that time. It was in Beverwijk. And I am continuously spending time in Amsterdam for reasons of working or relaxing. But I never did research here before. No.”

K.: “Hm, I could swear we talked to each other in the past. I have a kind of déjà-vu with you! By the way, what is your research about?”

Me: “It’s about renewable energy and about how Amsterdam is dealing with the process of energy transition. It is also about how public, economic, political, technical and individual actors are involved. I want to learn something about that kind of things!”

Me: “Well, if you connect it to the fact that there are practices where energy is produced by burning waste, than it is connected to recycling! But this is not my main focus. I am more interested in how renewable energy technology is used in order to reach the city’s goal to become a carbon free city. Also the question how existing infrastructure are used to create new ones is something I’m interested in. As well as how emerging energies like wind power or photovoltaic bring up a (emerging) green economy.”

K.: “Oh, you know, there was a politician who wanted to erect some wind turbines in the middle of the historic centre in Amsterdam. There was a huge local discussion about this!”

While we are chatting he simultaneously is looking in the Internet on his desk screen for “Amsterdam Smart City”, a kind of umbrella project that manages local energy transition on many different levels. K. never heard about it but immediately got ideas related to the topics that are addressed.

K.: “It is really interesting what you are doing. I never have been thinking before about that topic in Amsterdam. But the more I think, the more ideas I have.”

When I noticed K. had to go on with his next clients I tried to finish the inspiring conversation. I gave him my business card because he asked me to give him some information about German interdisciplinary PhD-programs. He wrote down his Email address as well as the name of the man who tried to build wind turbines in der middle of the historic centre. 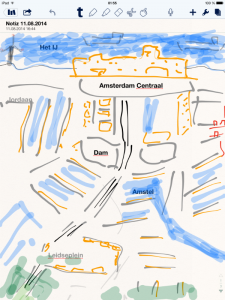 For the rest of the day I spent time to do “perceptual walks” in the city centre combined with sketching a first map that you can see on the image. I continuously will modify the map in order to have a good overview where the stories I am interested are located. Later I bought a Dutch prepaid SIM card for my smartphone. Doing this was at the one hand smart and smooth. I went into one phone shop that offers all kinds of prepaid tariffs from different companies. In general it is easy to get an economic tariff with data usage.

“Sorry mister, I’ve got no card with data usage left! You can go to the right where Vodafone is. Or to the left. There is T-Mobile. They are all the same!”

As I wanted a special company that was sold out this day another call shop came into my mind. I bought there a data card last year. In that shop managed by a young man of indian background I got what I wanted. For 5 Euros more than on the other place. Well, I wanted to have it immediately and not on the next day. Fast service, higher price! That’s how things are. Only the first day showed me how important it is to stay connected during fieldwork. When I registered my new telephone card and checked if the data connection works I got an Email from one of the persons I want to meet. He wrote me that we have an appointment tomorrow. Having a mobile Internet connection and a Dutch is really useful to make calls for organizing meetings and interview appointments. 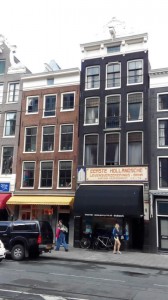 In the afternoon the perceptual walk in the city centre was leading me to some interesting houses. I passed the old Amsterdam house, which you can see on the photograph. It shows the “advertisement” of the first Dutch life insurance bank in Kantoor Keizersgracht 174-176. As Amsterdam has a long tradition in the finance sector and in stock market the life insurance bank is another story I want to follow in my research. The reason is that financial actors and networks are important aspect of the city’s infrastructure. Doing research on emerging energies and energy transition always is connected to financial questions. Creative ideas and developments need monetary investment in order to do “good practice”. For sure one path that I will explore during my research. 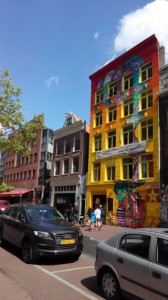 Later I walked along Spuistraat 199. The street is famous for having houses from the squatting movement, that has its origins in the 1960ies. On the image you can see “de Slang“. The Sneakhouse is “gekraakt” (occupied) since 6th of March in 1983. This was the time when the Netherlands was suffering a housing shortage while many properties have not been used. Today, when one walks through the streets of Amsterdam, one can imagine the contrary. Every single house seems to be used intensively. But the problem remains the same. Amsterdam – especially the city centre – is suffering housing shortage. And it is expensive to live in the centre. On 1st of October in 2010 squatting became de jure illegal in the Netherlands because of the Dutch squatting ban. But the problems are remaining anyway. Because of expensive rents in the centre and a housing shortage most Amsterdamers live in other neighborhoods. An allegory is the Dutch expression “Slaapstad“. This are huge neighborhoods outside the city centre where people usually at home in the evening and working in centre during the day.

The whole situation that Amsterdam city centre is so crowded just right now because of the touristic high season makes a lot of people angry. To give you an audio impression how an overcrowded city sounds you can just listen:

I recorded this on Dam square, a big hub of different people like tourists, business men an woman, local food dealers, trams, artists, to mention just a few of them. Having asked Amsterdamers, they complain because the national tourist policy doesn’t look closely to the question what Amsterdam can manage and where the limits are. My flat mate told me at home that …

“… a policy that brings to much tourists to Amsterdam is from a certain point against the local citizens“.

Concerning the displeasure of local people a lot is related to daily routines. Another person told me:

“At this time of the year you need at least double the time to go home after work! Amsterdam is so packed with people!”

But my flat mate also explained to me that on the other hand local people depend on the tourist industry because it secures a lot of jobs.

“You know, you need money to make your living!“

While exploring the city centre by walking around I experienced heavy monsoon like rain showers. The peaks of this heavy rains stop the whole pedestrian traffic – be it traffic of tourist or locals. Rain is too heavy to protect yourself with an umbrella or poncho, typical Amsterdam products, which are sold on every corner within the town canal belt. Concerning local micro economy Amsterdam is very aware of the business factor tourism. There is a perfect and easy to use infrastructure for whatever tourists want to have. And even the global sex industry and human trafficking have a hotspot in Amsterdam.

In the late evening when I wanted to take the bus to go to my flat on the other side of the IJ there was again heavy monsoon like rain. I tried to make my way from one tree or porch roof to the next. But it didn’t really protect because of so much water coming down from the sky. Have a look at the video that is not much edited or just listen to that Heavy Rain! , which I captured from the window of my flat –  just get an impression of a very usual weather condition in Amsterdam.

(Click above to get a sound impression and below to see a video!)
(This raw video material was filmed next to Amsterdam Centraal, which is the main train station.)